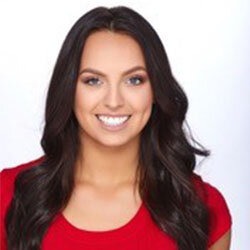 Payton grew up in Pittsburgh, Pennsylvania dancing since she was three years old. She was trained in all styles of dance and graduated from the Abby Lee Dance Company in 2015. While she was at Abbys Dance studio she starred on a national television show entitled “Dance Moms” for four seasons.Soon after graduating, she made the big move to Los Angeles, California to pursue her dream of becoming a professional dancer. Since then she has had the opportunity to work on some amazing jobs such as Billy Blanks Jrs movetube network with Paula Abdul, The Greatest Showman Live commercial, Crocs commercial starring Drew Barrymore, the hit tv show “Hit The Floor”, and “Schooled” the ABC network sitcom. She has traveled the world for dance in her short 22 years of life and loves that she has been given the opportunity to do so. She’s can’t wait to dance with you all every weekend on Dance It Out!