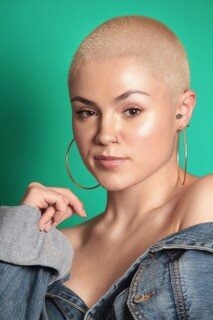 Allison “Buttons” Bedell is a New York based dancer, choreographer, creative director and model. With a Bachelor’s Degree in Dance from Queens College CUNY and years of training at elite urban dance studios in Manhattan, Buttons has cultivated her craft and experienced a diverse range of commercial work. She’s danced in music videos for a variety of artists such as Molly Brazy, Sharaya J, Angie Rose, The Jonas Brothers, Fat Joe and Cardi B, as well as choreographed for rapper China Mac. She’s performed live with Emarosa on their recent tour and in New York Fashion Week for PUMA x Jahnkoy. Her commercial work extends beyond dance- Buttons has modeled, danced and/or been featured in digital spots with Lancôme, RedBull, Wrangler, Toyota Japan, Kate Spade, and AdoreME. Her television work includes a Toyota USA commercial with the Jonas Brothers for the MTV VMA’s and her role in Dance It Out with Billy Blanks Jr. on the Lifetime Network. Buttons is currently signed to MSA. In between being on sets, she dedicates her time to teaching choreography classes in NYC and filming projects and photo shoots that showcase her choreography and creative directing. Her ultimate goal is to infuse her light into all of her projects and to spread love through movement.